After Mark Hargis inherited his childhood home in Woodbury, a remodel updated the main living spaces to fit the needs of his family of five.

After Mark Hargis’ mother and father passed away in 2016 and 2018, respectively, he and his wife, Jennie, had a choice to make: sell Mark’s childhood home or move into the home with their three young kids. They chose the latter, deciding to hold off on remodeling for one year while the family grieved the loss of their parents and decluttered nearly four decades’ worth of memories.

“I was looking forward to making it our own,” Mark says. “We kept some of the context of the older house, and from the exterior perspective, it looks the same. But from an interior perspective, how we’re using it, it’s just more functional. It’s more us.”

In order to achieve their goal of “building a customized house that would be comparable to one of the nicest, newest houses in Woodbury,” the homeowners hired Laura Wiener Scheidecker and the team at Cardinal Remodeling to carry out a complete main-level overhaul—starting with the floor plan. 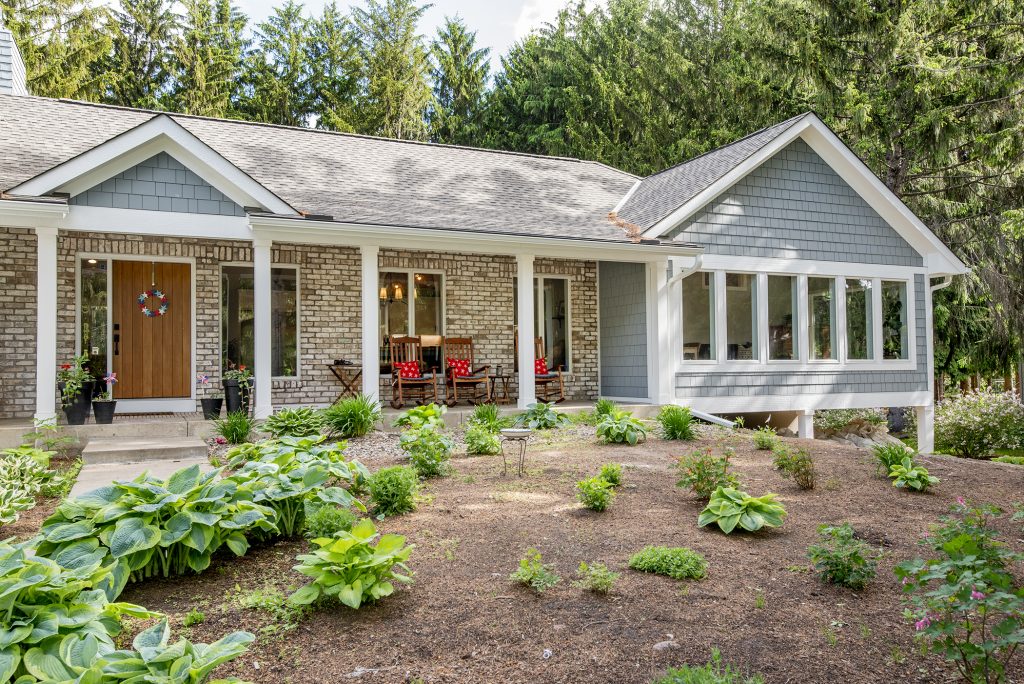 In typical 1980s fashion, all the rooms were closed off from each other, so the first order of business was knocking down walls and vaulting the ceiling with cedar beams. “If that’s all we did, you’d walk in and think, ‘Oh my gosh, how much square footage did you add to this house?’ And the answer is none,” says Mark.

A living room with a floor-to-ceiling brick fireplace now flows into a gourmet kitchen, complete with an extra-large refrigerator-freezer combo, a wall oven, and a pot filler secured to the subway tile behind the stovetop. A walk-in pantry was outfitted with additional countertop space and a sliding library ladder that matches the cedar beams on the ceiling. Anchoring the kitchen is an expansive Silestone quartz island that seats seven. “We always gather around the island,” Jennie says. “Friends come over, we’re hosting a kid’s event or a grownup event. Whatever the case, everyone gravitates to that space.” 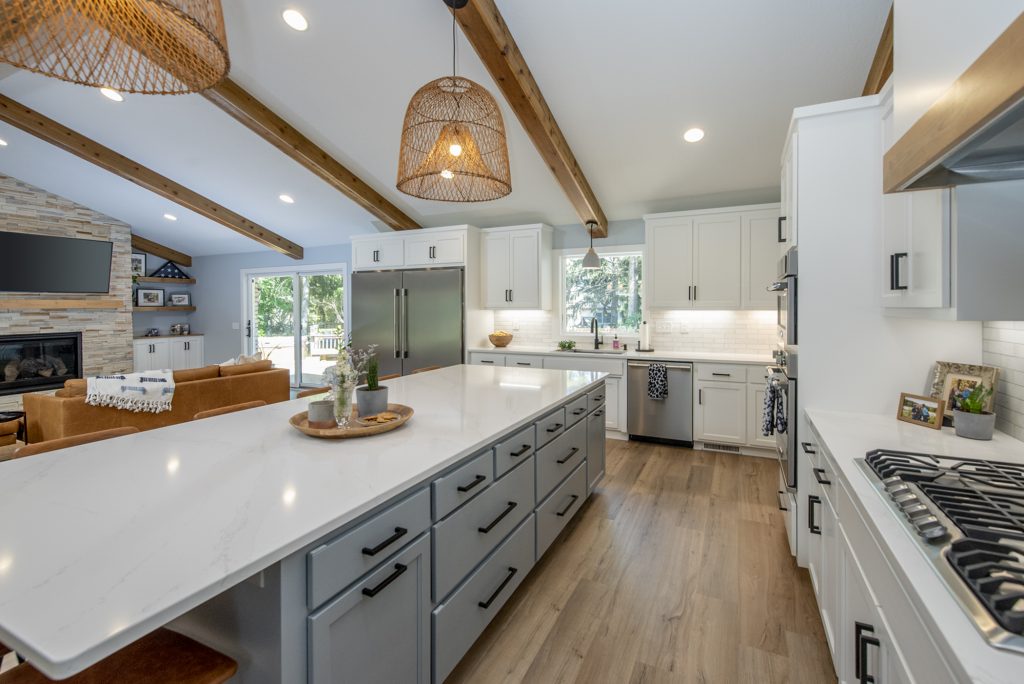 Long-term living was a top priority for the homeowners. Behind the kitchen, a “senior suite” was added to accommodate visitors and will eventually become Mark and Jennie’s living quarters, so they don’t have to worry about stairs as they age in place. “It’s more of a planned transition home for us, because the goal isn’t to sell or move out,” Mark says. “We are planning on living in this house for the rest of our lives.”

On the opposite side of the main level, a sunken living room was transformed to include a laundry room, a bathroom for guests to use when they come in from the pool, and a custom locker system designed by Mark that keeps jackets and shoes out of sight. “I spent 10 years coaching college football, so I’ve been in and out of locker rooms,” he says. “I told the cabinetmaker I wanted first-class, professional-style lockers, like the Vikings would have.” 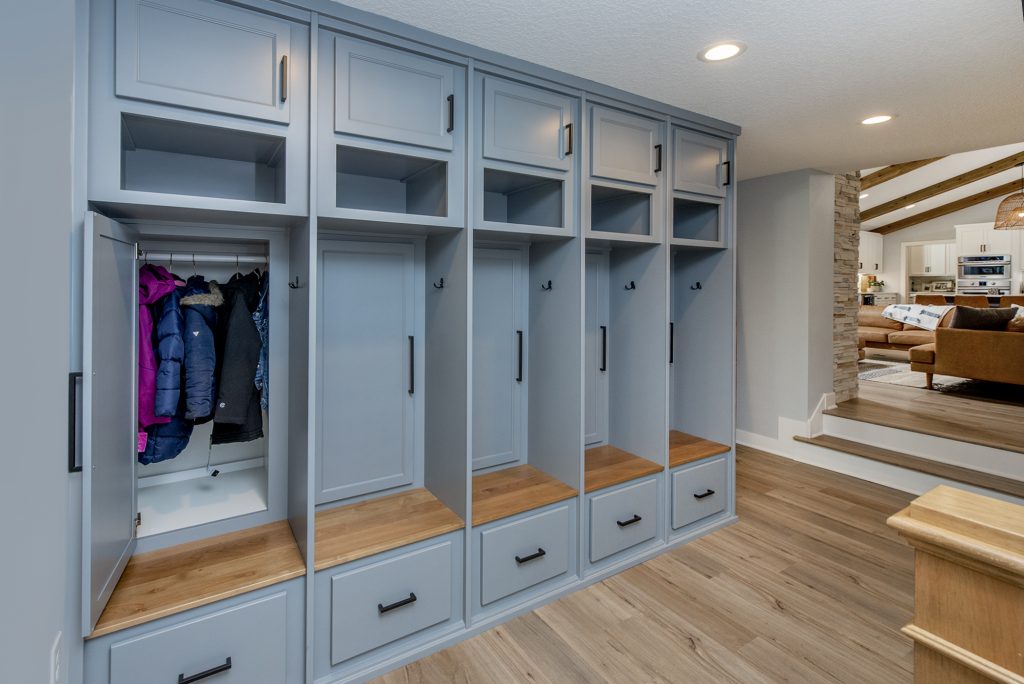 That’s not the only nod to the family’s passion for athletics. A sport court in the backyard transforms into a hockey rink come winter, and multipurpose flooring in the back entryway was installed to protect against skate blades. In the basement, a golf simulator ensures Markcan practice his swing year-round, and doubles as a space for the family to relax and recharge together. “We painted the walls and ceiling darker, and installed a wall of reclaimed barnwood from Manomin Resawn Timbers in Hugo,” says Scheidecker. “The simulator is really versatile, and you can use it for other activities, so the kids will go down there and play games or watch movies.” 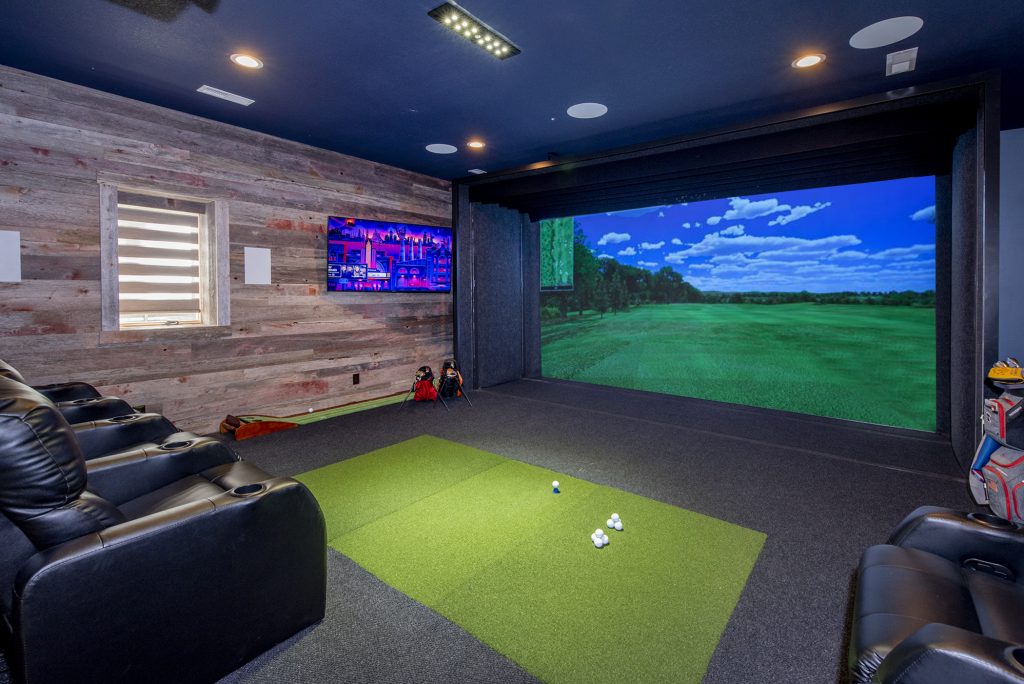 Despite all the changes, touches of Mark’s childhood home remain. For example, when the butcher block countertop was removed from the old island, it was refinished and repurposed as the family’s dining room table, blending old with new as the next generation takes over the home.

“I think Mark’s mom would have hated the process, but she would absolutely love what we did with the place. A thousand percent,” says Jennie. “As much as they loved to host and entertain, she would be eating it up.”