When Kathleen, Andrew, and their five children made the move from Texas to Minnesota, they did what many families are doing these days — bought their new home sight unseen! Learn the story behind this recently-featured home on the Remodelers Showcase.

“We actually bought our house online from Texas,” explained Kathleen. “We did a video walk through with the REALTOR® and figured if it was really awful, we’d move or we could fix it.”

And fix it they did. “Overall we were really happy,” said Kathleen. “We had friends nearby and really liked the location.” While the house had a lot of positives, the family still needed some changes to suit their lifestyle. They decided remodeling would be their best move for the money and their timeline.

Having had some less-than-perfect experiences with contractors in the past, the couple started slowly by adding a basement bathroom. They met Andy Sonnen, owner of Bluejack Builders, through their church and the school all their children attended. “I knew Andy’s wife, and we assumed the guy that we knew through our kids would do a good job,” Kathleen explained. They weren’t wrong.

First, they asked Andy to build out a bathroom in their basement. It was a test that Bluejack Builders passed with flying colors. Then they wanted to get going on revamping the main level of their 1990s Plymouth home.

They began with a rough sketch and explanation of what they thought would make the space work best for them. “Andy mocked up our idea, but he also mocked up plan that he would recommend,” said Kathleen. “He brought us what he thought would feel natural with the space. We really liked his plans.”

The new layout provided the expanded kitchen they were looking for to host the many fundraising events Kathleen puts on. She offers cake and cookie decorating classes to raise money for charity, and she said that now “it’s a lot easier to host more people and bring in more money for those events.” 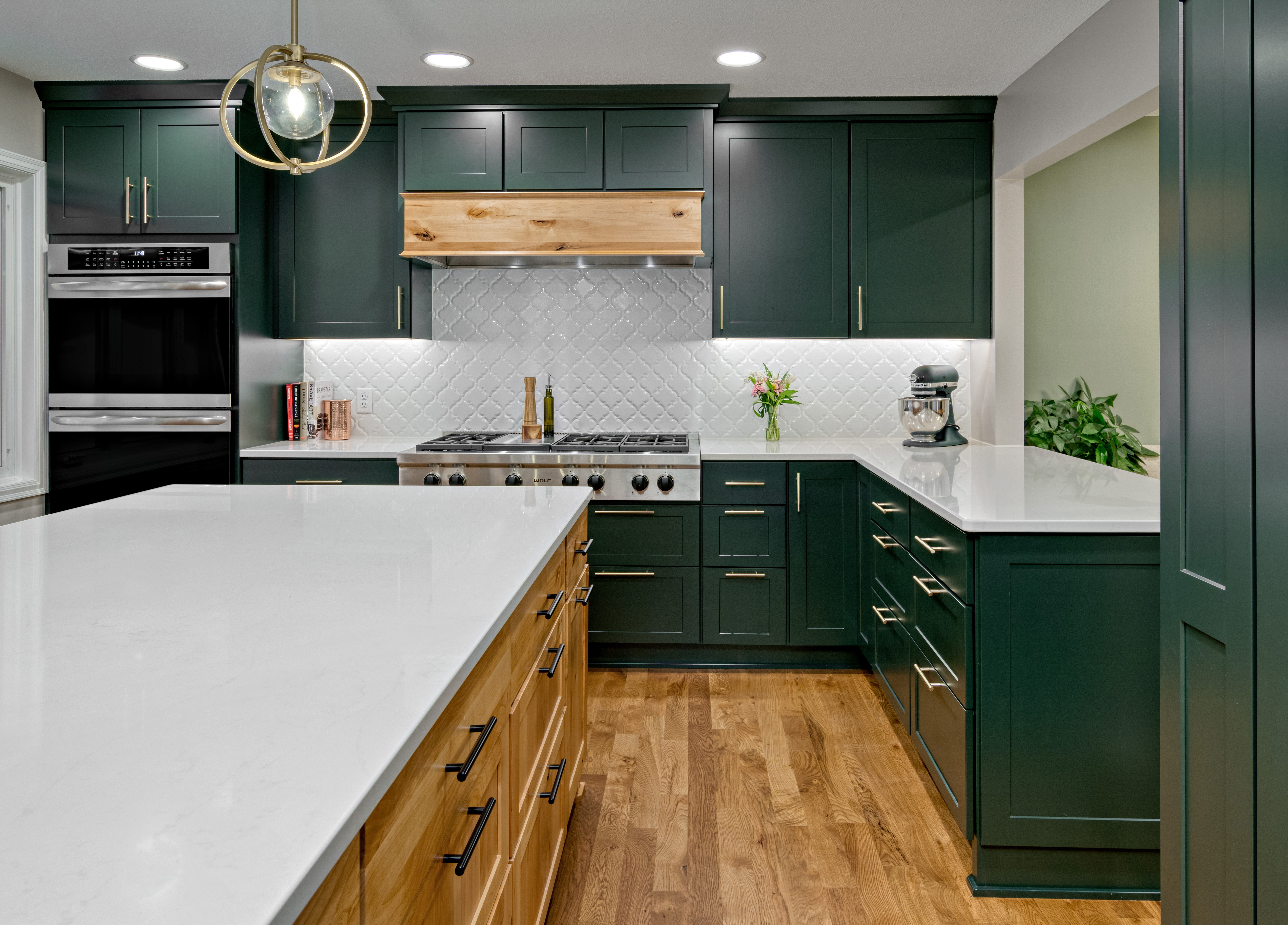 The new layout absorbed the old dining room into the new kitchen while they turned an unnecessary formal living room into a great dining space that boasts a table for 12. The kitchen has everything Kathleen needs for her classes: ample cabinet space, amazing appliances, a working island with a built-in step for the little ones, plus a separate island that can seat six.

The look is clean, elegant, and functional and relied heavily upon Kathleen’s design sense. She worked with Andy and his trade partners on making selections and choosing styles and finishes that the family loves. She said she did rely upon the experts when it came to some of the more prominent features that can look different in a small sample than when installed in a home. “He would tell us ‘if this is the look you’re going for, you want to try these options,’” she said. The remodel took two-and-a-half months. With bedrooms upstairs and the main-floor family room intact, they were able to make it work last summer by spending a lot of time outdoors.

Hiring a remodeling contractor that they trusted made a big difference. Andy had already demonstrated his attention detail and quality, and that extended to every single one of his trade partners. “We were really pleased from the very beginning with all the subcontractors that Andy works with,” Kathleen asserted. “Everything was done perfectly the first time.”

The entire family loves their “new” home. “There’s nothing we would change,” she says. “We’re really, really happy with everything about it.”