Amanda and Craig have moved around a bit with their careers, but with two young boys, Drennen and Garrett (now 12 and 8), they decided it was time to settle down in one place. They knew their current home in Alabama wasn’t quite where they wanted to be. They discussed the West Coast, where they had lived for a while, and Craig was pushing for Chicago. But Amanda wasn’t convinced until she discovered Minnesota. “I visited Minneapolis for a work convention and fell in love,” she exclaims.

She described the city to Craig, explaining that it’s just like Chicago but has a smaller and more welcoming vibe. That did it. The young family sold their home and moved to an apartment in Uptown based on Amanda’s recommendation.

Both work in the home construction materials industry, Craig as regional sales manager and Amanda as a marketing manager, so they knew they’d be purchasing a home when they figured out exactly where they wanted to live. It didn’t take long to decide they wanted to be somewhere along Minnehaha Creek with its combination of natural beauty, trails, and nearby city life.

“It was during the height of the market and took us over a year to find the right house,” Amanda says. “I can’t tell you how many houses we looked at, so when we found this one, we decided we had to put in an offer right away.”

She laughs about how Craig walked in and fell in love immediately. He liked the high vaulted ceilings and more contemporary flavor. He told Amanda it reminded him of when they lived in California.

Amanda was less enthusiastic, mostly due to the tiny kitchen. She told Craig “I’ll only put in an offer on this house if you agree we can remodel the kitchen.” Their offer was accepted and the family settled in. 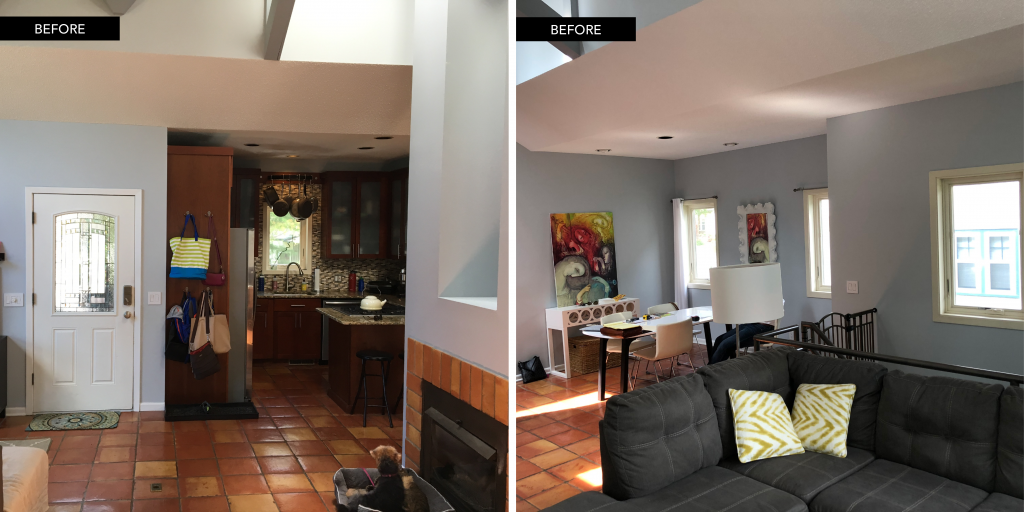 It took about a year before they were able to get the ball rolling on their remodeling dream, but “we realized it was smart to have waited,” explains Amanda.

Like most kids, Drennen and Garrett were inclined to drop everything the minute they walked in the door. Then they got a puppy, a Welsh terrier named Rosie, and realized that just remodeling the kitchen wasn’t going to cut it. “We discovered it was smart to have waited; we definitely needed a mudroom.”

Amanda was clear about what she wanted for their busy lifestyle. “With lots of chaos going on in all aspects of life, I just needed a sense of peace, everything in its place and a place for everything.”

She liked Scandinavian/Nordic design and felt it would be a really good design style for their more contemporary residence so she began by googling the search term. First up was Puustelli, a local remodeling firm known for its imported Finnish cabinetry and soothing style.

They visited a few open houses and talked to the Puustelli team, but wanted to make sure they looked at enough options before they jumped in. And with Craig’s background as a homebuilder in Alabama, whoever they selected would really need to know their stuff forwards and backwards.

“This was a big deal,” says Amanda. “We don’t spend this money haphazardly; our hopes and dreams are in this.”

She heard too many prospective companies question their budget, but “every time we talked to Puustelli, they’d say we’ll figure out a solution whatever your budget is. We just felt they were more on board and in support of us.”

Throughout the year-plus they spent researching and saving for the project, Puustelli was patiently waiting. The couple made up their minds to go with their hearts, and haven’t regretted it for a minute since. 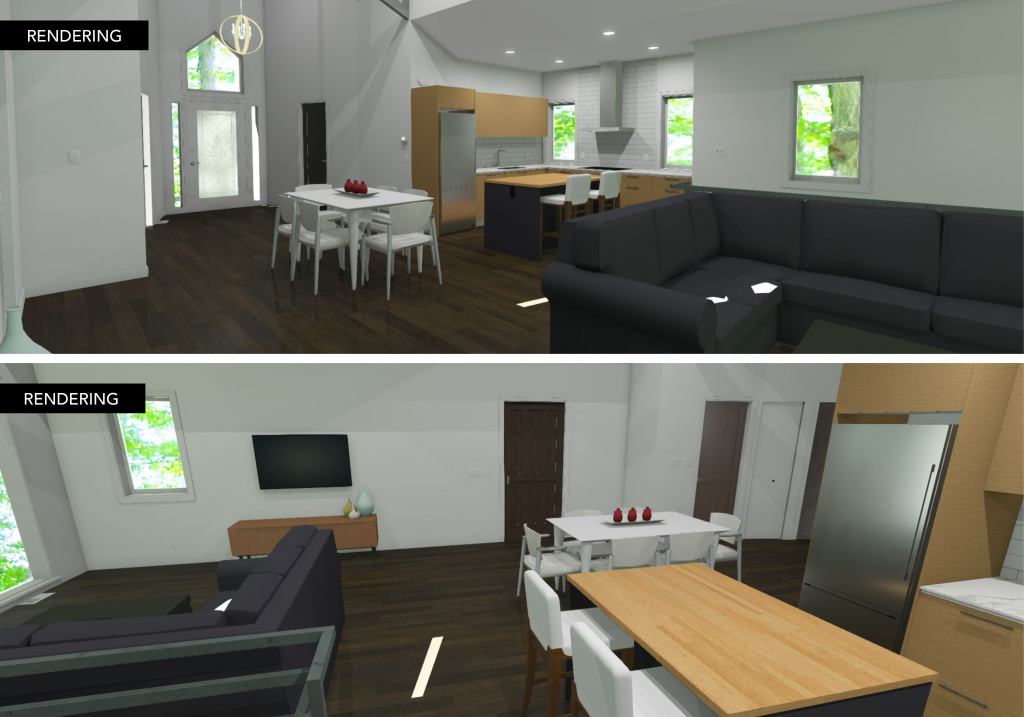 First off came the design phase. “They gave us three different scenarios (good, better, best) with price ranges,” Amanda reports. “I loved that approach, it allowed us to pick and choose to make sure we got what we wanted within our budget.”

They met several times to ensure their new kitchen would truly fit their needs. “I literally brought them the size cereal boxes I wanted to be able to store,” Amanda says. “I wanted to solve the perpetual question, where should this go.”

This was when Puustelli’s cabinets took center stage. “It’s almost like cabinet magic,” says Amanda. “They fit into one cabinet what another cabinetry company might take three.”

With so many choices and options, plus the personalized solutions from the Puustelli designers, Amanda was amazed and relieved knowing she’d soon have a kitchen that functioned perfectly for their family.

With plans in place, the family decided it was best to rent an AirBnB during construction. “The main reason was our dog,” Amanda remarks. “Where do we keep her? We figured she would have PTSD after living with the workers and noise.” 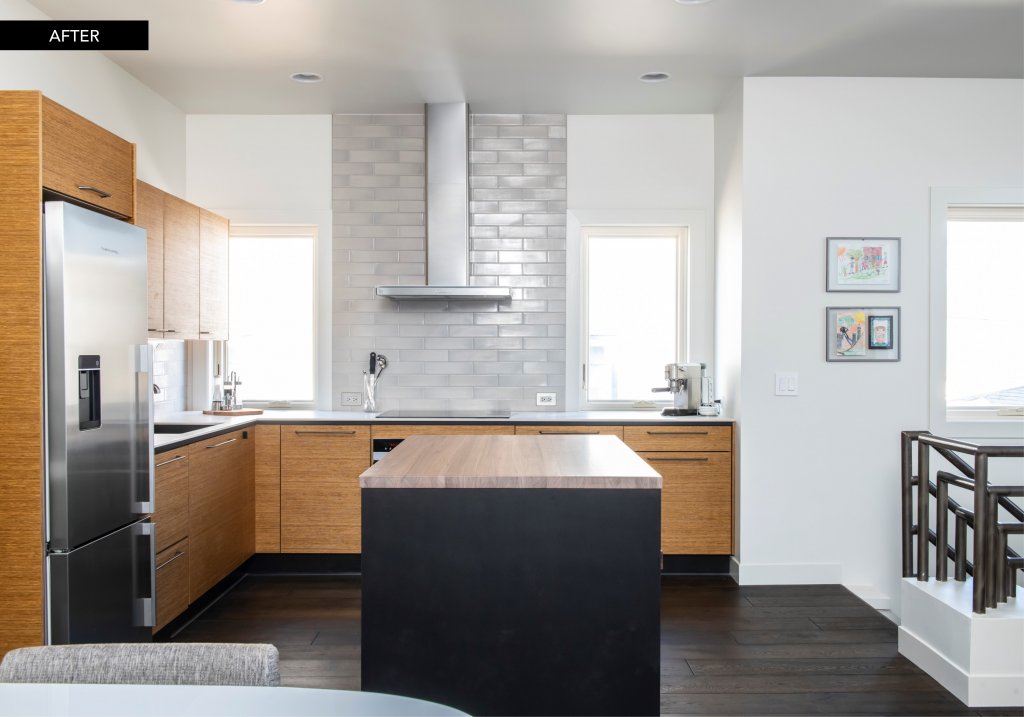 The family moved out and left Puustelli to get on with the project. About 10 weeks later, their amazing new kitchen and mudroom is complete, and the family is thrilled. “They were 100% on time and 100% on budget,” extolls Amanda.

When asked what she likes best about the new spaces, she says, “It is just as I imagined. I had this deep-down fear that when it was done I’d somehow be disappointed. I got exactly what I hoped for in every way.

“Craig is feeling really good about it, too,” she continues. “The quality and attention to detail is what really excites him. He knows all the tricks of the trade, and was thrilled that Puustelli did everything right.”

Wendy Danks (wendydoodles.com) has had a career-long love affair with the Parade of Homes, spending the last 20 years as its marketing and communications director. Recently retired, she now has time to spend on her other great love, writing.