When Boyd and Jamie Candeefirst toured their seven-bed, four-and-a-half-bath home in Inver Grove Heights, they instantly fell in love with the bones of the house and the overall footprint. Situated on an acre of land that backs up to a state park, the view—highlighted by southern-facing, floor-to-ceiling windows—was a big draw for the couple and their two young kids. 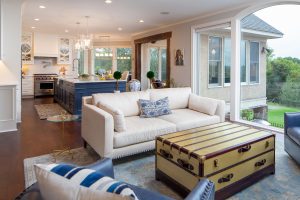 “You almost feel like you’re in a treehouse when you look out the windows,” says Jamie. “You feel like you’re surrounded by nature, even though you’re in a suburb.” However, the choppy floor plan, recessed lighting, and dark wood tones—all hallmarks of the style from the early 2000s, when the homewas built—needed an update, and renovations began shortly after the Candees moved in.

Working with Highmark Builders and interior designer Kelly McDermott of Ruby+Suede, phase one of remodeling focused on the main level. To promote open-concept living, a wall was removed between the kitchen and family room, where a white millwork mantle is the focal point, flanked by cutouts designed to showcase pieces from the homeowners’ art collection. 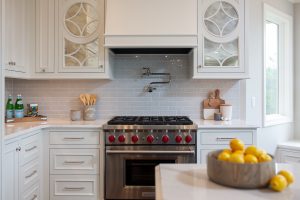 In the kitchen, a light and airy aesthetic is achieved with gray-veined quartz countertops from Cambria and Designed & Made custom cabinets, some outfitted with glass and intricate millwork to mimic the circle motif on the home’s interior doors. “If you can carry little details throughout your remodel that ties everything together, it’s going to create a more cohesive look,” says McDermott. “It creates a nice visual for the eye and an overall better flow for a space.” 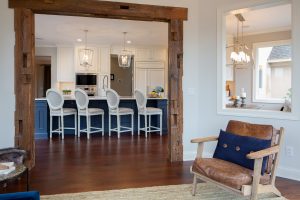 The 11-foot island—a must-have for this family who loves to entertain—pops in brushed brass finishes and Benjamin Moore’s Hale Navy paint, an accent color that appears throughout the house. “It’s such a fun, welcoming piece that really anchors the whole remodel,” says McDermott, who describes Jamie’s style as a mix of traditional and French country. “If you can incorporate color in any way, that’s always a bonus.” 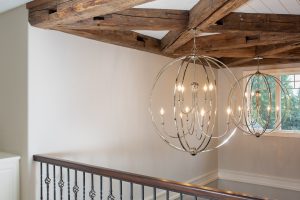 A few smart tweaks make a big difference in the sunroom, where a stained wood ceiling was replaced by white shiplap, soffits were removed to make the area feel bigger, and a new 10-foot sliding door floods the space with natural light. Jamie’s favorite part of the room—and the entire remodel, for that matter—are the 100-year-old reclaimed wooden beams from Manomin Resawn Timbers, sourced from barns throughout Wisconsin, that can also be found in the kitchen entryway, foyer, and owners’ suite. “You can see the original nail holes, and there’s so much character and history in those wood beams,” Jamie says. “It blends the modern with a really classic entity.” 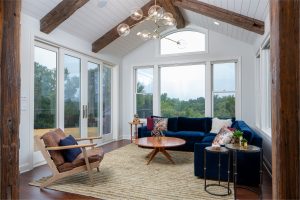 The Candees recently completed phase two of their remodel: an owners’ suite overhaul featuring a private bedroom entry and, in the bathroom, marble checkerboard floors, a spa-inspired shower, and a stand-alone soaker tub. The library was reimagined as well, finished in mahogany herringbone floors, floor-to-ceiling bookcases, a monochromatic blue color scheme, and, to top it all off, a gold-flecked wallpaper on the ceiling. “Don’t forget about the ceiling details,” McDermott advises. “Some people call it the fifth wall in a room. If you can do something fun with your ceilings, take the opportunity, because it can really transform a space.” 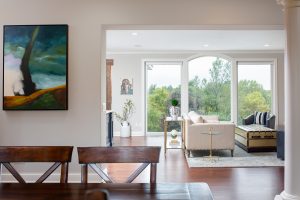 The Candees’ plan is to tackle a renovation project every two years until the home is a perfect fit for their family’s needs and style. “We’ve invested quite a bit into the home and plan to continue those investments to really make it ours,” says Jamie, noting that a future phase three will address the lower level. “We love updating and taking on design projects. It’s a lot of fun.”