Amanda Whiting, a minister and blogger, and her husband, Josh, a pilot, always knew they wanted to build new, but imagined it would happen closer to retirement.

“We loved the idea of creating a home from scratch, and putting the details we love into the space,” shares Amanda. But as their family grew rapidly, their timeline shifted dramatically.

Amanda and Josh had three biological children and had just adopted three more children when they began their journey building new. The need for a larger home was quite apparent. “We decided that the home we built needed to be a place that the children would remember,” she says. “A home that held all of our memories, together, because so many parts of their stories had been lived separately.” 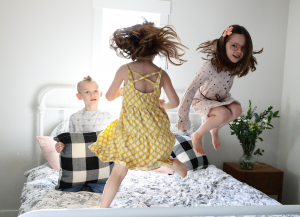 When the time arrived to turn their homebuilding dreams into reality, they found 20 rolling acres in Hampton. It had the space they needed for farm animals and areas to garden. “We wanted to build a home and have land, and create a space that was new for everyone,” she says. “A place to grow our unique new family, especially as we came to adopt one child during the building process and one just moving in, a year later.”

Trees surround the property with serene views everywhere you turn, but there is still easy access to the Twin Cities for a quick commute to work.

They turned to Hartman Homes to build their seven-bedroom, three-bathroom home. They interviewed several builders, but the communication and care the Hartman Homes team provided was the key for the Whitings. “They listened to the story of our family and made that the vision to build around. We felt they cared to know us and why we wanted a home, not just another house to be built,” says Amanda.

Once the build process was underway, Josh and Amanda were involved in every step, including choosing exactly where the home would sit on the lot. They even adjusted the initial placement to save a very special tree. 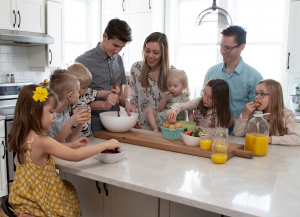 Now, Amanda and Josh’s two-story farmhouse welcomes anyone who walks through its doors.

Amanda was inspired by a photo of an older home that had an arched pass-through between the kitchen and dining room with a butler’s pantry tucked in the middle. “We started planning our home here, and these arches are still one of my favorite parts of the home,” says Amanda. “The pantry in and of itself is fun.”

The Whitings didn’t want the floor plan to feel too open since their children are such varied ages. In a modern take on the traditional farmhouse style, the stairway splits halfway with one direction leading to the master suite and the other leading toward the children’s rooms. The entire layout maintains visibility while still creating privacy and space as needed.

Their oasis is now the perfect place for the family to learn and explore. Amanda homeschools their children, and the land is a source of exploration and learning.

Now that they’ve been in their home for more than a year, they feel fortunate that they’ve had the opportunity to build their dream home to make memories in for years to come. “Home, to us, is the people that make it,” says Amanda. “It is a space that fits a table large enough to always welcome a guest. It is the land that gives us what we need, and helps us find ourselves in the quiet and ordinary places. As we’ve made it, home is a place where all feelings have space, and we can find rest.”

Scroll through @ThisAbundance on Instagram and you’ll see how Amanda shines a light on the beauty of the ordinary. Read through her blog and you’ll gain a deeper understanding of how the smallest gestures can have the greatest impact.