A remodel 18 years in the making turns an outdated two-story into a modern, open-concept home in Minnetonka.

Amy Haugen waited 18 years to refresh her two-story home in Minnetonka. Originally built in 1987, the property’s floor plan was choppy and outdated, and unused spaces neglected to take advantage of the square footage.

Living in the home for nearly three decades, Haugen had ample time to figure out her pain points and the aesthetic she wanted to achieve. Born in Hong Kong, she appreciates the clean lines and smooth surfaces common in Asian interior design, and after meeting with New Spaces’ Björn Freudenthal—who hails from Helsinki, Finland, known for similar design tendencies—she felt he was the person to bring her modern home dreams to life. “I love the contemporary style, but over the years, my tastes have changed,” says Haugen. “I wanted to bring this home into the 21st century with the colors and the open floor plan.” The first order of business was raising a sunken living room to create a uniform floor height. “It was a real ankle-breaker,” says Freudenthal, which could cause problems later on for aging in place, which Haugen intends to do. “The space also becomes much more versatile and flexible when there’s a continuous, even floor height.” 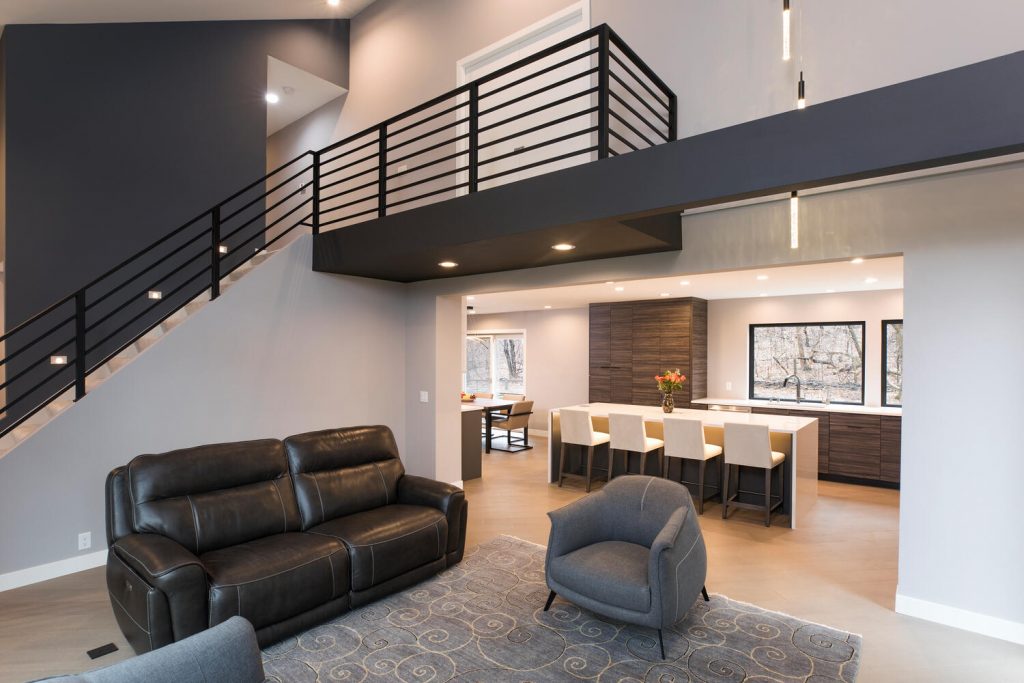 From the kitchen, there are now clear sightlines to the dining room and front living room, where natural light floods in through windows that replaced walls during the remodel. “As I go through a design, I try to think about how individuals are going to move through the space,” says New Spaces’ lead designer, Sharon Barczak. “I knew my client would naturally be walking past that window frequently based on the geometry of the home and the space flow. It’s about locating those windows, so we maximize the human nature of being drawn toward what’s beyond.”

The dramatic floor-to-ceiling fireplace wall is another focal point. Meant to mimic a concrete column, the surround houses a slim, linear electric fireplace with color-changing embers. Above, a metal railing and beam system provides a framework for a decorative light fixture that illuminates both stories of the home. “At night, when all the accent lights are on, it’s out of this world,” says Freudenthal. 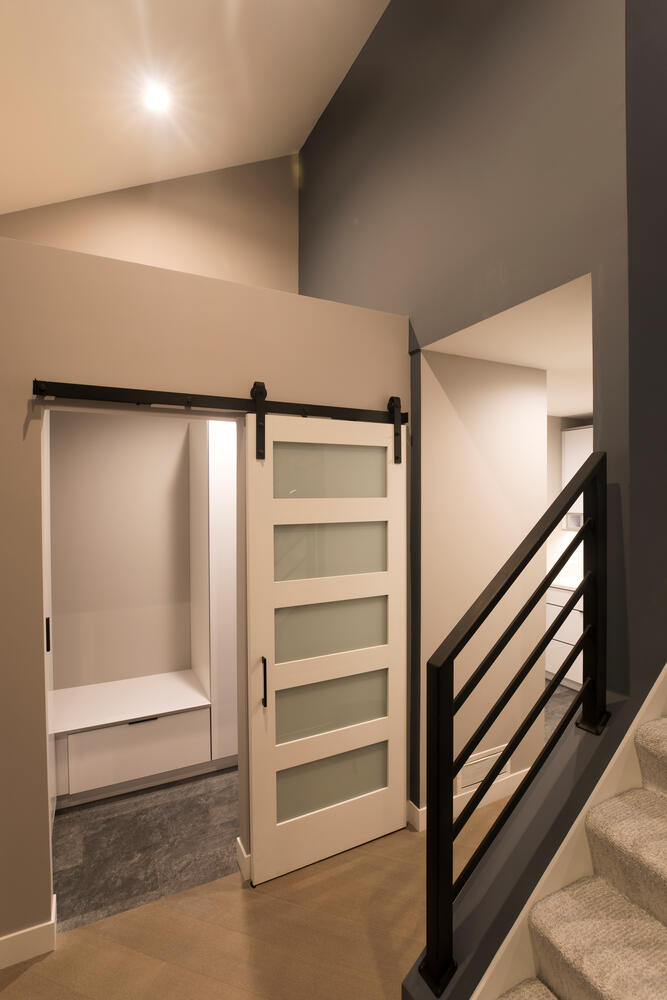 To keep the main living spaces free of clutter, a new mudroom was built to the left of the staircase, where a sliding barn door opens to reveal storage cabinetry and a drop zone for Haugen when coming in from the garage. “Amy is pretty active. She’s an avid tennis player, so having room for her gear was very important,” says Freudenthal.

Though it took 18 years to finally execute the remodel, getting the home Haugen always wanted was worth the wait. “When you get to create something as meaningful as somebody’s forever home, we don’t take that lightly,” says Freudenthal. “We are part of another human being’s journey. It’s been a blessing to work with Amy and see her dream come alive.”