When the Von Vetts purchased their two-story Colonial in Edina, the kitchen hadn’t been updated in decades, but this young family of three was able to see the possibilities.

When Caleb and Emily Von Vett first toured their home in Edina six years ago, it was clear the Colonial two-story needed a lot of work. The previous homeowners had lived there for 52 years, and while everything was in good condition, few updates had been made over the decades—including the double wall oven from 1961. Still, Emily, a residential real estate agent, was able to see the potential. “People walk through, and they just don’t think about something that might be an obvious fix,” Emily says. “I love when people have been in a house for a long time because it means it served their family well. Maybe the home would work for us, too.”

While the Von Vetts tackled small improvements, like removing wallpaper, they didn’t feel rushed into a remodel. It was five years before they reached out to Crystal Kitchen + Bath—whose work they first saw and fell in love with during a Remodelers Showcase home tour—to renovate the kitchen. 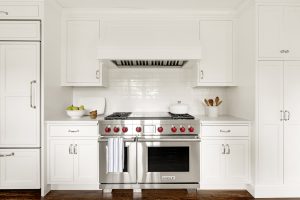 In addition to installing modern appliances, some of the must-haves on the Von Vetts’ wishlist included new hardwood floors, a connected kitchen and dining area, and access to the backyard from the kitchen (as it was, the back patio was only accessible through the garage). “Emily definitely had inspiration photos and a clear vision of what she wanted,” says JoLynn Johnson, owner of Crystal Kitchen + Bath. “She and Caleb were very decisive, which made the process a lot easier.” 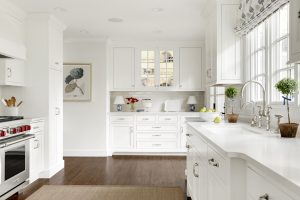 Over the next six months, Johnson and designer Mary Maney got to work bringing that vision to life. The wall separating the kitchen and dining room was removed, allowing space for an eat-in kitchen. Oak hardwoods add warmth to new white inset cabinets from Crystal Cabinet Works and Caesarstone quartz  white matte countertops, while a built-in hutch displays fine china and doubles as serving space while entertaining. An expanded window over the sink—complete with a Rohl bridge faucet in polished nickel—looks into the backyard, which can now be reached by one of two Marvin patio doors that let in plenty of light. 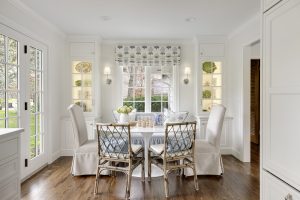 The result is a fresh, updated kitchen with a traditional aesthetic that seamlessly blends with the rest of the home. “I wanted it to match the whole house, rather than try to do something modern and what people are doing in new construction,” says Emily. “I wanted it to feel like it’s been here, or maybe even feel older than the actual age of our house.”

With the kitchen nearly completed, the only thing holding up the project were the backordered Sub-Zero refrigerator and Wolf 48-inch range, a problem for the Von Vetts, who were up against a very important deadline: the birth of their first baby in July. Caleb explained the situation to the vendor, and the appliances were delivered a week later, only 10 days before Emily had their son, Baron. 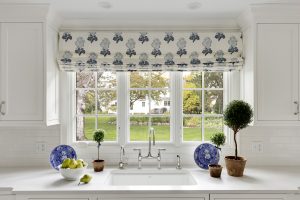 Despite that last-minute scramble, Emily says Johnson and Maney made the entire project a stress-free process, and encourages other homeowners to use theRemodelers Showcase as a resource when planning a remodel.“The possibilities of our dated home were actually exciting for us. A large project requires a big-picture, long-play mentality,”Emily says. “With Crystal Kitchen + Bath’s expertise, the payoff is a beautiful kitchen designed specifically for us—a total luxury.”

“The possibilities of our dated home were actually exciting for us. A large project requires a big-picture, long-play mentality,” Emily says. “With Crystal Kitchen + Bath’s expertise, the payoff is a beautiful kitchen designed specifically for us—a total luxury.” 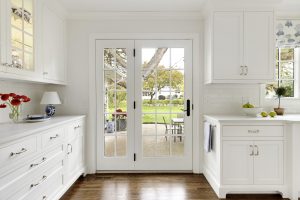