A kitchen in Edina gets a long-awaited refresh, elevating the space to match the grandeur of the 10,000-square-foot home.

When Mary Maney of Crystal Kitchen & Bath first walked through the home of Collin and Brenda Barr in the Rolling Green neighborhood of Edina, it was clear the kitchen was in need of an overhaul.

“The cabinet doors were falling off. There was blue tape holding them up,” Maney recalls. “Their island was too big for the kitchen, and there was no space to get around. They didn’t feel like their original kitchen was very grand for the size house it is.”

The Barrs knew the kitchen would need to be redone when they first purchased the 10,000-square-foot house in 2008, but then the Great Recession hit. Rather than take on a major renovation at the time, they instead focused on routine maintenance through the years, and even toyed with the idea of selling the property around 2010. They ended up staying, and after years of searching for the right contractor for the job, they hired Crystal Kitchen & Bath to turn their vision of a dream kitchen into reality. 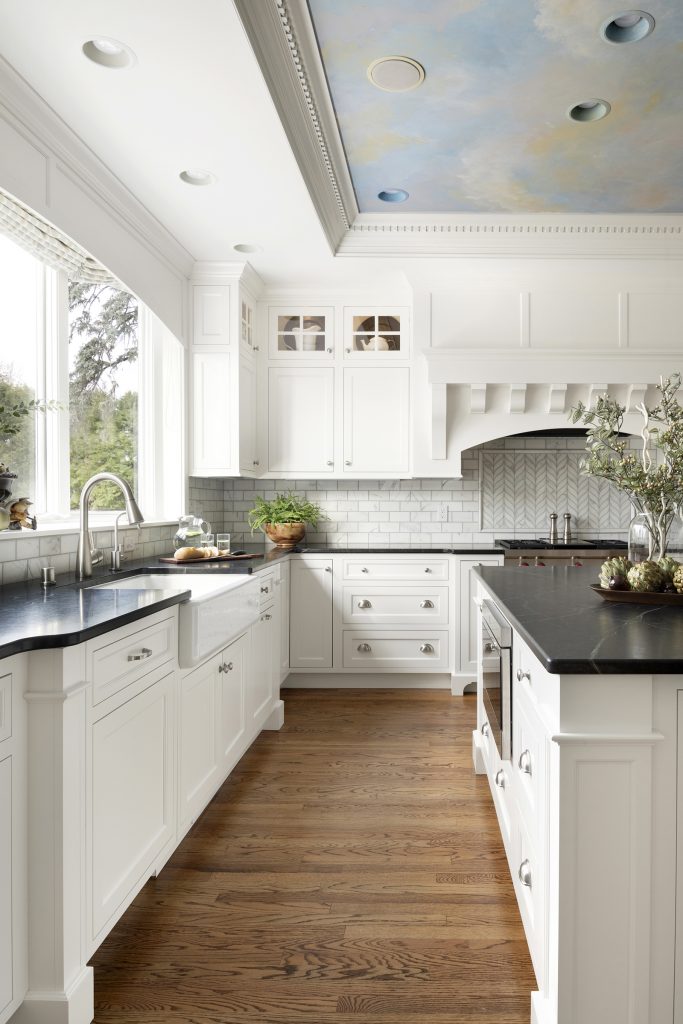 Creating a focal point was a high priority, which the team achieved by installing an 81-inch decorative range hood that makes a statement. Four-pane glass doors along the upper cabinets break up the white color palette and add interest, as do the black soapstone countertops accented with white veining and a marble subway tile backsplash.

“The kitchen is now elevated to the level it should be for that house, yet it looks like it was there to begin with. You don’t feel like it’s out of place,” says Maney, pointing out elements that aided the transition from old to new, such as the existing floor that was patched up and refinished, a bar area with painted wood paneling that inspired the custom cabinet color, and a small built-in bookcase housing cookbooks and treasures that was simply relocated. The most notable holdover from the original kitchen, however, is the tray ceiling featuring a hand-painted mural of clouds and blue skies that was there when the homeowners moved in. “I get so many compliments on it. I don’t understand how anyone could take it down or cover it up,” says Brenda. 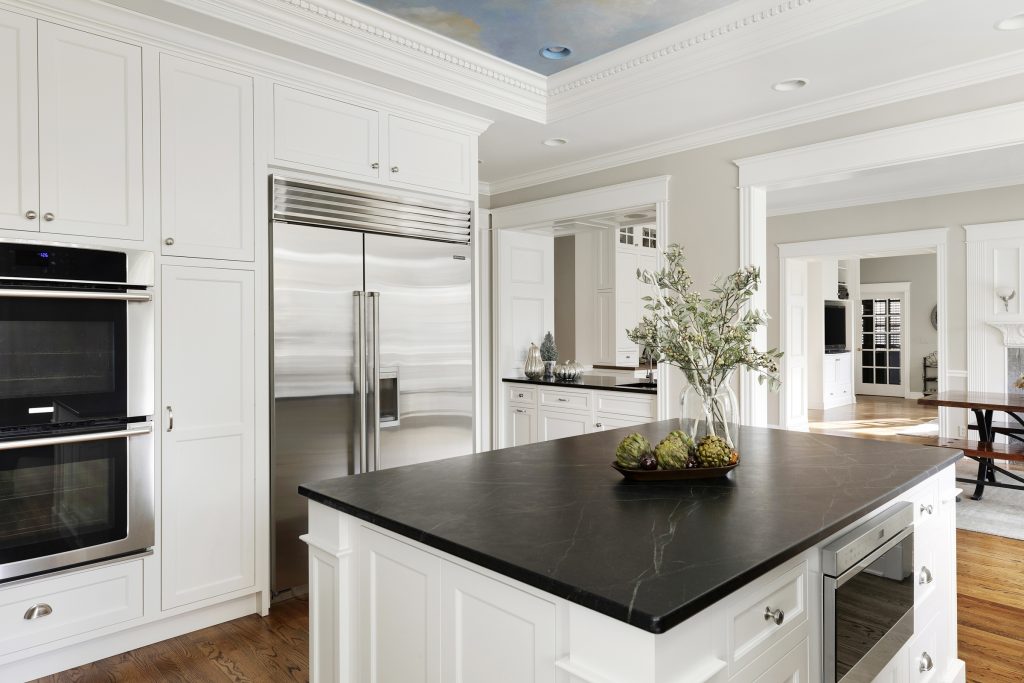 From top-of-the-line appliances—a 42-inch Sub-Zero refrigerator, 36-inch Wolf range top, and two Cove dishwashers—to the farmhouse sink, the kitchen has truly become the heart of the home, where Brenda and Collin can entertain their friends and family, including their three grown sons and one grandchild, with two more on the way this fall.

“Right now, we’re at a time in our life when most people our age would be downsizing, but we’re planning to stay at least until Collin retires in about five years,” says Brenda. “Part of that is because we love our kitchen so much and we want to be able to enjoy it now that we’ve waited this long to have
it redone.”